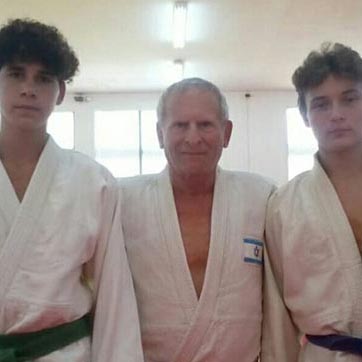 Two students from the Kfar Silver Youth Village have been accepted on to Israel’s national judo team as it prepares for the 2020 Olympics in Tokyo.

We congratulate Aharon Naori and Wolad Solovoyev for their achievements so far, and wish them luck in their attempts to qualify for next year’s international competition.

This story first appeared in Kan Ashkelon. You can read the original in Hebrew here. Below is a translated version:

About three years ago, the management of the Kfar Silver Youth Village initiated the establishment of a unique judo program in the village in cooperation with the Judo Association, as part of the implementation of the village’s strategic plan to promote education through sports.

The goal of the program was to turn the youth village into a regional educational and sports center. Two of the students, Aharon Naori of Netivot, a ninth-grader, and 11th grade Wolad Solovoyev, who is studying in a boarding school in the village as part of the Na’aleh program, began training three years ago with no prior knowledge.

Leading the 12-pupil judo team at Kfar Silver, Daniel Leopold, was previously the coach of Israel’s women’s team and Yael Arad’s personal coach at the Barcelona Olympics, where she made history and won a silver medal, Israel’s first Olympic medal.

The director of the Youth Village, Shimon Solomon, decided to integrate judo to provide an opportunity for the students of the village to integrate into the sport and advance the vision of Kfar Silver. This fit well with the vision of the Judo Association to expand its activities in general, and in the south of Israel in particular.

As part of the cooperation, the association helped renovate the judo hall, equipment and professional cover, and the plan was launched. Mr Leopold managed to bring the team to impressive achievements in a short time.

The first significant achievement came last year at the Association Championship held in Eilat as part of the judo festival in which a delegation of Kfar Silver students won seven medals.

Naori won first place and Solovyov, who also competed against alumni, came in third. The two young judokas were accepted to the Israeli national team, which is preparing for the upcoming Olympics in Tokyo, Japan in about a year.

“We have set up a project with quite a few difficulties, but we have set a high standard and succeeded in reaching the first goal, which gives us a lot of joy and pride in the village, and especially inspires us not to be afraid to aim high,” said Solomon Solomon.

“At the time we decided to build the program, we built an array of programs designed to advance and bring pride to the village, our students and the entire region. The decision was made in cooperation with the chairman of the Association, Moshe Ponty, without whom the program would not have been established, and on this occasion I would like to thank him for his commitment to the success of the program.

“In addition, I would like to thank my deputy in the village, Tzafrir Ben-Sinai and his team, which was entrusted with the establishment and management of the program, and of course coach Danny Leopold, who manages professionally.

“I hope that soon, through World ORT Kadima Mada, the group will go to training camps and competitions abroad as part of the cooperation between branches of the education network operating around the world.”

Mr Leopold added: “This is a unique and exceptional project, and there is a boarding school with young judo teachers, but there are youngsters who already have a significant track record in judo. This is a huge achievement that within two and a half years we have reached the level that our students are now going to practice.

“As part of the Israeli national team, our athletes invest a great deal of time in reaching these results, and they practice four times a week. The competition is not always the most important thing, thanks to judo, the students receive values ​​such as perseverance, excellence, determination of time management, and more.

“The students in the group made significant changes in their lives as a result of judo training, and some even completed their studies in the village with a certified judo instructor’s certificate in addition to their matriculation exams, all of which were funded by the village.

“The transition to training within the Israeli national team is the next step for our two outstanding students, since they have to compete against strong opponents in order to advance. We owe special thanks to the chairman of the Judo Association, Moshe Ponty, who without his support and assistance of the union would not have been implemented.”

David Benish, CEO of World ORT Kadima Mada, said: “We are excited and proud of our students who have made great achievements in the field of judo and we are confident that they will continue to do well in the future.

“The investment in the wonderful youth of Kfar Silver is always in front of our eyes and it is a great privilege for us to nurture excellence in the young generation, judo and all areas of life.”