A group of ORT students from Ukraine will travel to China next week to take part in an international robotics competition.

Their trip to Guangzhou for the Make X finals comes following success in their home tournament – the Make X Ukraine Robotics Hackathon 2019 in Kiev last month.

Earlier this year K-2 came second in the Wonder League Robotics Competition and were the only finalists to solve the technical element of that tournament. The team have also participated in the World Robot Olympiad, First Lego League and in the first all-Ukrainian tournament with Minecraft.

Meanwhile, at ORT Jabotinski School #94 in Odessa, tenth graders Anastasia Pavlenko and Anna Yurchenko came second in the final of the “Future of Ukraine” national scientific and technical competition for young innovators.

Their project used the latest technology for building intelligent systems to create a smart device system for pets (SDS4P). It aims to help animal owners care for their pets, monitoring nutrition, hygiene, climate and activity.

Anastasia and Anna explained: “You can set the time for feeding your pet and SDS4P will feed it. For many animals, climate is important. That is why we have installed a climate control system.

“Games are an important part of the life of pets, but often the owners do not have time to play with them. Our smart toy is controlled by phone. At the same time, the toy can work in two modes: automatic and manual.

“One of the SDS4P modules makes a graph of the animal’s activity, on the basis of which the owner can track the state of his four-legged friend.”

The idea for the system emerged from the students’ participation in hackathon competitions last year. The pair attribute their success to having “gained invaluable knowledge and experience in teamwork and in the field of the latest technologies”.

At ORT “Aleph” Jewish Gymnasium in Zaporozhe, David Rzhevsky has become one of the authors of the city’s Green Map project.

The map was developed as part of an environmental competition to highlight green attractions and areas of the city. It is now in use in Zaporozhe’s tourist district as well as at the city’s polytechnic university. The 11th grader’s work is also available on Google Maps.

David, who praises the opportunity ORT has given him to study biology, geography and computer science at school, said: “This story began in the summer. My schoolmates and I inspected the parks and I took photos of abandoned parks and posted them on Facebook groups. 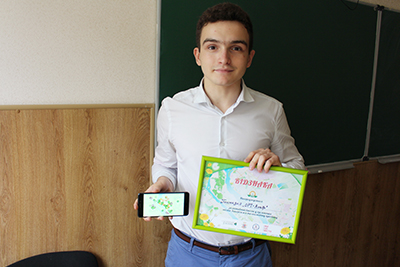 “With my brother Artyom and my friend Yegor Plost – who also attend ORT-Alef, we participated in the Ecoforum and the map was designed thanks to these efforts.”

These innovative Ukrainian students are great examples of how ORT schools remain relevant by adopting a forward-thinking attitude to education.