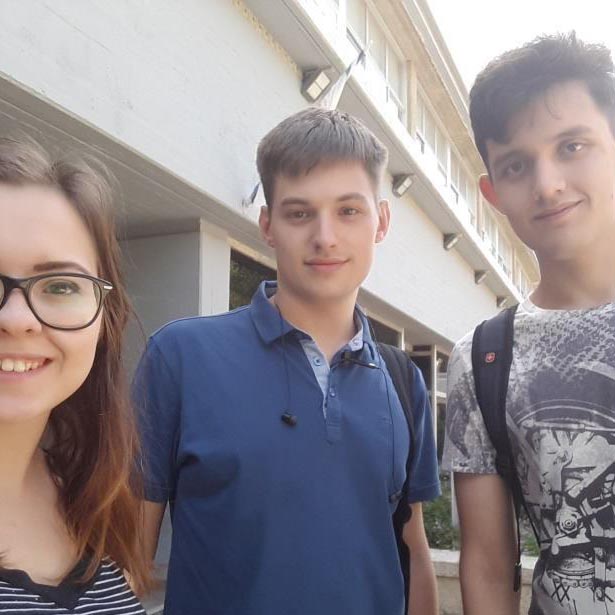 It’s been four years since she arrived in Israel but Darya Levitan’s made it – she is now a fully-fledged Technion undergraduate!

“It was great!” the ambitious teenager said of her first day at the internationally renowned university where she’s embarked on a four-year degree in data systems engineering. “I don’t have much homework – but I know it will come…”

Indeed, Darya has known what to expect for quite some time: as an outstanding member of the first intake of World ORT’s Anieres Elite Academy, she already attended courses at the Technion while still at high school.

Darya was well prepared for induction day at the Technion.

“I knew what it would be like. I was prepared,” said Darya, one of 13 Anieres graduates starting at the Technion this week.

And that’s what Anieres is all about: preparing talented, aspirational – and brave – children for life in Israel. From learning Hebrew to studying STEM and embracing Israeli life, the Anieres programme is geared to producing hundreds of engineers over the 17 years it has been funded to run by an American donor who graduated from the Central Training Institute, which World ORT operated in Anieres, Switzerland, for four decades after the war.

“Probably most of the graduates will choose to remain in Israel as they will have a job and will have built a network of friends and colleagues. That will be of enormous benefit to the country, which is suffering from a shortage of people with such qualifications,” said then World ORT Kadima MadaDirector (now Director General and CEO of World ORT) Avi Ganon when the programme started in 2013.

That was the year when Darya arrived in Israel from Naberezhnye Chelny, an industrial town of half-a-million people east of the Tatarstan capital, Kazan.

“It’s been a wonderful experience to be on this programme – and every year it gets better. I recommend Anieres for anyone who loves science because it’s a special programme that gives a lot of opportunities to everyone who takes part.”

There had been a steady exodus from the town’s small Jewish community as people sought something other than a job in the truck factory for which the town is known and Darya, too, wanted to spread her wings. A passionate mathematician, she had the talent to go far. But studying at a university in Moscow or St Petersburg – as her non-Jewish friends were planning – would have been prohibitively expensive for Darya’s family.

Then, while on the Jewish Agency for Israel’s Machon programme, Darya heard that World ORT was looking for teenagers to complete high school at the WIZO Nahalal Youth Village in northern Israel before completing an engineering degree at the Technion – Israel Institute of Technology. Teenagers just like her.

“I knew about the Technion, about how good it is; and I wanted to study there,” she said. But when, at the tender age of 15, she won a place on the Anieres programme it was still hard to leave her mother and little brother behind.

“It was difficult at first, although being surrounded by other Russian speakers helped. Every time I phoned home I told my mother that it was better for me, that it’s giving me more opportunities. And my mother understood. After a year it became easier and it’s kept on getting easier.” Her mother, a lone parent, is a Hebrew teacher but Darya was so focused on maths while growing up she didn’t learn Ivrit. At Anieres she learned it and enjoyed the opportunity of being able to choose new subjects to learn, taking up physics and computer science.

But she didn’t abandon her beloved maths, repeatedly shining in competitions.

Now she’s focused on a future that would have been far harder to realise without the social, emotional, educational and financial support World ORT’s programme has given her.

“When you don’t have parents in the country, Anieres becomes your family. And if it wasn’t for Anieres I would not be able to study at the Technion – Anieres paid for me to have the extra physics tutoring I needed to get in and also paid for the psychometric entry test, which is very expensive.”

She went on: “I hope to work in a big company, make some money, and then open my own start-up that would give jobs to students at the Technion, because it’s hard for students to find work without experience.”

But she hasn’t left Anieres behind her completely: on the data systems course with her are fellow alumni Boris Feiman and Alexander Chirkov (pictured above). Another two alumni have entered the Ben Gurion University of the Negev,while the rest of this year’s crop of 49 Anieres graduates will go to university after completing military service.

The past four years has been a life-changing experience for Darya and one that she encourages others to apply for.

“It’s been a wonderful experience to be on this programme – and every year it gets better. I recommend Anieres for anyone who loves science because it’s a special programme that gives a lot of opportunities to everyone who takes part.”